What Is An Ombudsman And What Do They Do?

What Is An Ombudsman And What Do They Do?

The International Ombudsman Association (IOA) is hosting its’ 11th annual conference this year in Seattle WA. Conflict Transformation Associates, LLC (CTA) is a supporter of the IOA and often uses IOA research as we show the high cost of conflict in the workplace and how it can be reduced by using CTA conflict transformation philosophies.

The organizational ombudsman is defined by the International Ombudsman Association as: “a designated neutral who is appointed or employed by an organization to facilitate the informal resolution of concerns of employees, managers, students and, sometimes, external clients of the organization.”

An ombudsman works with people and teams within an organization in a confidential, neutral, independent, and informal way to:

It is often easier to understand a new concept by an example, let’s hear about Ann:

Ann started a new job three months ago in the health services area, a very distinguished hospital. The application and interview processes were very challenging and Ann was very thrilled to have the position of her dreams, out of the operating room and into a research role.

During the course of the first three months, she began to have some concerns. The other three people in the department seemed distant and were not warming-up to her. The work was a challenge and her co-workers appeared frustrated that Ann was not catching-on as quickly as they desired.

Ann was very stressed, she wanted to master the job, and the situation was taking a toll on her and her family. During her three-month review her supervisor indicated that she was not working out as they desired and she suggested Ann look within the hospital for another opportunity.

Ann was devastated. Her dream job was evaporating. Maybe she should just quit and go somewhere else! Instead, Ann decided to visit her organizational ombudsman, she did not want to go to HR because she did not want to create a file that will follow her and her career. She had not visited the ombudsman in the past and as she read about the role she was most pleased that the ombudsman process was confidential and informal, no record of her visit.

Ann felt much better after the conversation. The ombudsman was the catalyst, remaining neutral, and posing questions so that Ann was the creator of her list and her next steps.

This example provides a few very important conclusions in support of an ombudsman office. Ann is an asset to the hospital and her leaving would have caused unnecessary turnover and new hiring costs to the organization. Ann did find another opportunity in the hospital that better matched her skill sets and better satisfied the needs of the hospital. Ann could not have created this positive outcome without the conversation with the ombudsman. 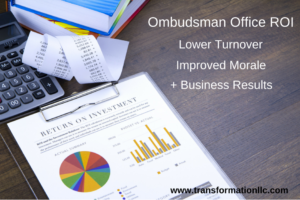 Organizations that offer an ombudsman office experience less turnover, improved morale, and overall positive business results. The IOA provides a wealth of further information on their website, http://www.ombudsassociation.org/home.aspx, and we encourage you to explore the possibilities for your organization.

By Dawn Miller Sander|March 28th, 2016|Categories: Ombudsman|Tags: |Comments Off on What Is An Ombudsman And What Do They Do?

About the Author: Dawn Miller Sander

Dawn Miller Sander completed a 20+ year sales management career with AT&T and moved to work in her area of passion, addressing conflict within organizations using various tools, training and dialog. After receiving her Masters Degree in Conflict Transformation, she is now leading the firm CTA using her facilitation, mediation, ombudsman, and training skills to bring transformation to organizations.